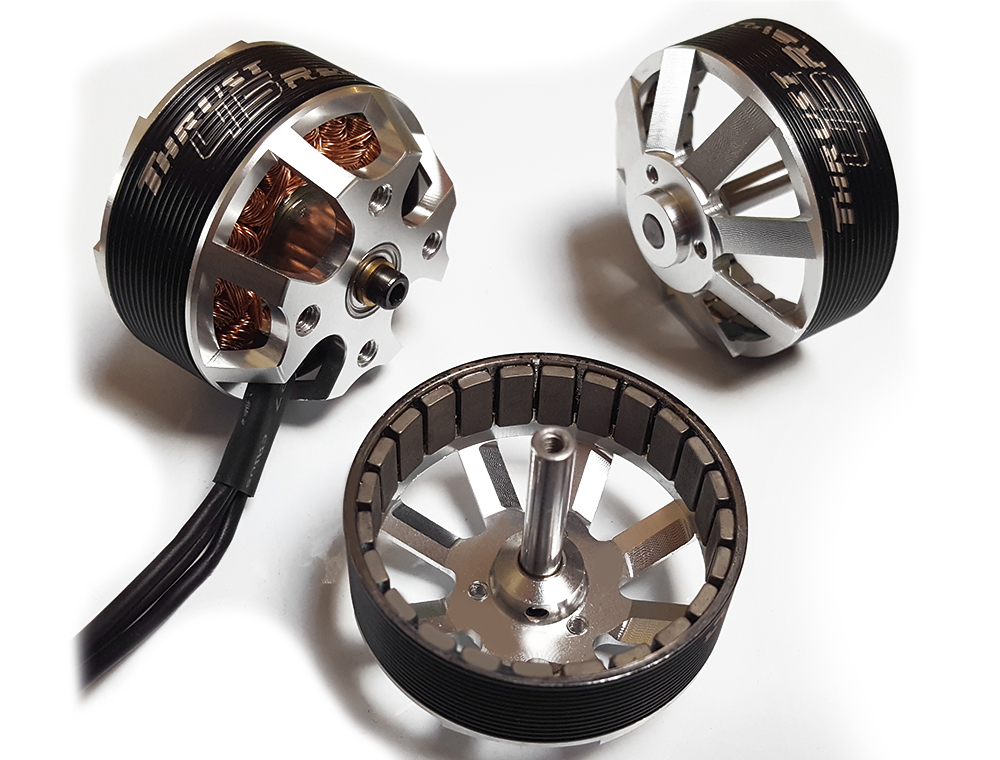 For a number of years, modelers have accepted the notion that in order to attain top notch performance, one has to run outrunner motors to the extreme limit with the risk of overheating. In fact, heat has become inevitable part of contemporary high performance brushless motors and nothing much could be done about it. However heat is one of the main contributors to premature magnet deterioration and bearing failures leading to permanent performance degradation over time or even dangerous and catastrophic destruction due to thrown magnets. In order to avoid unwanted heat damaging the motor, some modelers have resorted to over sizing their motors. This in turn increases the all up weight and thereby affecting wing loading and flight performance. There seems to be a no win situation and the only way to enjoy this wonderful hobby is to accept this seemingly hopeless compromise.

Motor power has always been quoted in Watts, but heat is Watts too. So, the real question is: Are all the quoted Watts being used to drive the motor, or is there a significant amount of Watts wasted in heat?  To answer that just touch your motor immediately after flight and if it is hot enough to burn your finger, THAT is where the Watts went as opposed to driving your airplane, therefore, quoted watts are essentially meaningless when evaluating a motor (because it does not indicate the efficiency). The propeller’s RPM is the most important performance factor. We at PA understood that without effectively eliminating heat, all the good motor attributes already available in our motors and as well as others, contributes very little to the motor’s overall performance in service because heat building up under load means loss of efficiency and eventually leads to detrimental effects in the electro-magnetic properties of the motor. These effects cause significant deterioration of power, thrust and eventually flight duration.

We set a target to make a high performance, extreme thrust motor, which is light, runs cool and efficient for maximum flight time, is made of highest-grade materials and features precision engineering and machining. This led to rethinking the design of current brushless outrunners, their strengths and limitations and thus led to the development of a completely new line of PA Thrust® motors.

Some of the common brushless outrunner manufacturers have gone as far as incorporating high temperature magnets and exotic adhesives to circumvent the effects of the heat problem. There are myriad of crude and inefficient cooling techniques ranging from a multitude of holes, to fins, to bolt-on fans and impellers.

Unlike those, the PA Thrust® cooling design took a complete departure in the current thinking by engineering a High Velocity Force Cool Ventilation (HVFCV) into the rotor as well as taking full advantage of thermodynamic properties of the stock material itself. HVFCV is achieved through a set of solid metal turbine impeller blades painstakingly CNC milled as an integral part of the rotor assembly, which not only provides the positive force cool ventilation by drawing fresh cool air through the stator and magnets, but also doubles up as a heat pump to first draw excess heat from the rotor assembly itself and then act as a heat exchanger by expelling it through the air stream contacting the solid metal turbine blades as it spins at high velocity.

Micro ridges, intentionally CNC cut into the rotor, further multiplies the end bell’s surface area and serve as radiators to further boost thermal dissipation achieving unparalleled cooling and henceforth having the ability to swing larger propellers than other conventional outrunner motors of similar class while remaining considerably cooler and more efficient. There is more to the “Cool” look of the CNC exterior casing than meets the eye, and looks can be deceiving. Under the hood, is where serious engineering comes into play.

With only the highest quality materials and components used in the manufacture, the PA Thrust® motors are manufactured with the tightest tolerance making it possible to maintain the smallest air gap between the stator and curved neodymium magnets, significantly boosting torque and thrust. The relatively silent and vibration-free operation of the motor is a testament to the tight tolerance manufacturing regime we have adopted specifically to harness the maximum power produced by the motor (within the limits of today’s technology) for the sole purpose of swinging the prop. This allows the motor to swing propellers of at least one size larger than any contemporary motor in its class while running cool and maintaining maximum efficiency.